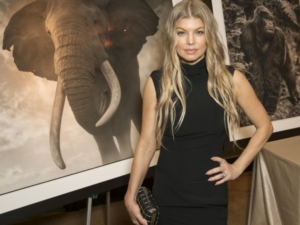 WildAid, the San Francisco-based wildlife organization, raised close to $2 million this past Saturday at their first-ever Los Angeles event! The gala took place at the Montage hotel in Beverly Hills, and was a celebration of 15 years of heroic efforts advocating for threatened and endangered wildlife and marine species. Kristin Bauer, Maggie Q, Josh Duhamel, Fergie, Michael Cudlitz, Bo Derek, John Corbett, Chevy Chase and Paula Abdul were among the many celebrities who came out to support the “Evening in Africa.”

Heart-wrenching PSAs about the rhino horn and ivory trade were screened, and WildAid’s CEO, Peter Knights, spoke about the organization’s mission. WildAid ambassador, actress Maggie Q, took the stage shortly after to receive the 2015 Wildlife Champion award for her ongoing commitment and support of the organization’s work. Since 2012 Maggie has spoken on behalf of animals around the world, participating in photo shoots and interviews, as well as PSAs including “Say No to Rhino Horn,” educating about medicinal myths of rhino horns, and “I’m FINished with Fins,” speaking out against shark fin soup.

Emotional as the evening was, WildAid was prepared to celebrate with entertainers from Tanzania and a lively auction with extravagant items up for bid. And guests were happily giving! The live auction began with a $3,000 bid for a $100 bill, followed by extraordinary adventures in Africa, Costa Rica and Indonesia, a dinner with cast members from The Walking Dead, and a one-of-a-kind Serengeti gold/diamond bracelet from jewelry designer Frank Alexander Jewell.

From Tanzania, Kenya and South Africa to Thailand, China and Vietnam, WildAid continues making significant strides in reducing global consumption of wildlife products. And while events are a significant source of funding, educating others to stop the buying will also help put an end to the illegal trade, poaching, gaming and other inhumane activities that wildlife and marine species face.