If there is one cause that most people, republican or democrat, can get behind it’s the movement to protect wild animals. This was evident at the recent WildAid gala at the Ritz-Carlton in San Francisco. $1.5 million was raised to support WildAid, Peter Knights’s foundation that’s attempting to end illegal wildlife trade as soon as possible. The trade of banned shark fin, elephant ivory, rhino horn, and other animal products is estimated to be over $10-20 billion a year. Although there are laws and regulations, animals continue to die at alarming rates. It’s WildAid’s mission to end the demand of these products. ‘When the buying stops, the killing does too’ is the organization’s logo. WildAid’s team is changing the environmental landscape, especially in Asia, through glossy advertising campaigns that feature athletes, musicians, and celebrities—some of which were at the gala earlier this month.

WildAid champion and star of Vampire Diaries Ian Somerhalder was honored and encouraged young people to become more conscious consumers. “In regards to the environment, the government is no longer looking out for you,” he said referring to the results of the Presidential election. “Nothing can change now without the populace. You have to have people behind you. It’s going to be effectively about conscious consumerism. If your vote didn’t count on Election Day, you get to vote every single day when you walk out of your house—with your dollar. Who are you going to purchase from? Are they companies that are good stewards of the environment and the communities around them—or are they not? It’s now about putting down Snapchat, Facebook, Instagram, and Twitter, and actually diving in as a human being and understanding what and how you are buying. Through that we can stop the senseless slaughter of our environment and particular species.”

Other notable attendees included Bo Derek and her boyfriend, John Corbett, Somerhalder’s wife, Nikki Reed, Amy Tan, Dennis Miller, and Gina Carano. The under the sea-themed gala featured both silent and live auctions with experiences including a wilderness safari to the Seychelles, jewelry created by Alexander Jewell specifically for WildAid, and Yao Ming’s limited edition wine. Nico & Vinz performed their hit song Am I Wrong? Keeping up with the animal awareness theme, the menu was vegetarian with stuffed portobello mushrooms as the main course.

WildAid’s 2016 Gala highlighted as one of  San Francisco’s “haute happenings” in November.

9 Haute Happenings to Add to Your November Agenda
BY KATIE SWEENEY | NEWS | NOVEMBER 1, 2016 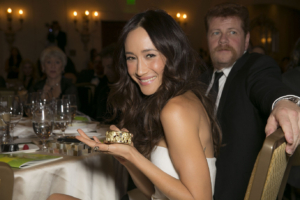 This month’s not to be missed gala—the 2016 WildAid Gala—takes place on Saturday November 12 at the Ritz-Carlton. The theme is An Evening Under the Sea and 16 years of the nonprofit’s tireless work to stop the illegal trade of wildlife will be celebrated. Artisan Alexander Jewell has created an exclusive line of fine jewelry dedicated to endangered species that will be auctioned off at the event. Actor Ian Somerhalder’s conservation work will be awarded and special music guest Nico and Vinz will perform. Last year’s gala raised $44,000 during the live auction—all of which went directly to protecting animals and the reduction of consumption of dangerous wildlife products like shark fin and elephant ivory.